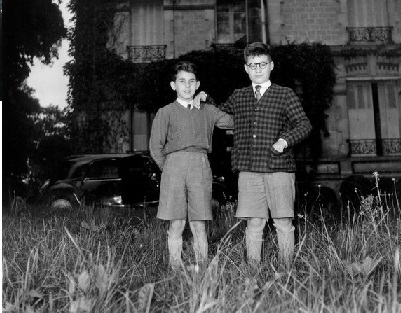 The Pope, the Jews, and the Secrets in the Archives

Documents reveal the private discussions behind both Pope Pius XII’s silence about the Nazi deportation of Rome’s Jews in 1943 and the Vatican’s postwar support for the kidnapping of two Jewish boys whose parents had perished in the Holocaust.

In early 1953, the photograph of a prominent nun being arrested was splashed across the front pages of French newspapers. Over the next several weeks, other French clergy—monks and nuns—would also be arrested. The charge: kidnapping two young Jewish boys, Robert and Gérald Finaly, whose parents had perished in a Nazi death camp. The case sparked intense public controversy. Le Monde, typical of much of the French media, devoted 178 articles in the first half of the year to the story of the brothers—secretly baptized at the direction of the Catholic woman who had cared for them—and the desperate attempts by surviving relatives to get them back. It was a struggle that pitted France’s Jewish community, so recently devastated by the Holocaust, against the country’s Roman Catholic hierarchy, which insisted that the boys were now Catholic and must not be raised by Jews.

What was not known at the time—and what, in fact, could not be known until the opening, earlier this year, of the Vatican archives covering the papacy of Pius XII—is the central role that the Vatican and the pope himself played in the kidnapping drama. The Vatican helped direct efforts by local Church authorities to resist French court rulings and to keep the boys hidden, while at the same time carefully concealing the role that Rome was playing behind the scenes.

This is one of the more emotional articles I have read in my life.  The Catholic Church did nothing to prevent the Holocaust.  They did hide thousands of Jewish kids, whose parents were murdered by the Nazis.  For the most part, 99% of these kids were Baptised and turned into Catholics, often never learning the fate of their parents, or even their true lineage.  Its a very sad story.

Pope Pius XII (Pope from 1938-1958), turned a blind eye to the Holocaust.  His behavior after the Holocaust, in forcing the conversion of thousands of Jewish kids to Catholicism is unforgivable.  In fact, whenever the Church offers moral advice to Israel, I would tell them to go Fuck themselves.

This article is about the Finali brothers.  Two boys who were toddlers when their parents were taken away and murdered by the Nazis, but the parents placed the boys under the care of the Church for safekeeping.  The Church never wanted to let the boys back to their families after the Holocaust, and it took a great deal of high level politics an court cases, and the death of the Pope, to set these boys free, and to return then to their families and to their Jewish roots.

The boys, later moved to Israel with their aunt, Gad became an officer in the IDF and an engineer, and Robert became a doctor.  Without intense family and diplomatic fighting, then would have been Catholics in Europe.

There are many more thousands who were not saved, and today Europe is full of Catholics, who don't know that their parents, or grandparents, were Jewish and were murdered by the Nazis.